The Hermitess of West Mountain

Sarah Bishop, the hermitess of West Mountain, lived a solitary life in the wooded hills in northern Westchester County, New York. During the Revolutionary war, as a young woman, her father’s house was burned and young Sarah was captured and victimized by British soldiers driven north from Long Island Sound. She escaped her captors, or was freed by them, and fled from human society, preferring to live among the woodland creatures, tending her own small garden, and having little contact with the one animal she claimed to fear—man.

A devout Christian, she attended regular services at the local church on Sundays, returning to the small outcropping of rock that she called home each night. Her sole companions otherwise were the birds, foxes, deer, and reptiles that lived freely about her and it is said that the birds had become so familiar with her that they seemed to heed her almost as little as if she had been a stone. There was no trace of fire in her cave and during winters, she was confined to her cave for several months, living upon roots and nuts which she had picked in the season.

In 1809, her final winter came and passed and she was not seen in the villages around. Some of the townspeople searched the mountain and found her standing erect, feet sunk in the frozen marsh of the valley. It appeared that the two decades of living alone had weakened her such that she was unable to extricate herself from the boggy ground. She died, as she had lived, alone in the wilderness.

She was laid to rest in North Salem at the June Road Cemetery where she is remembered with a small plaque. 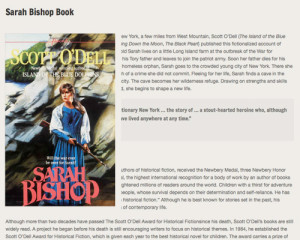