Sarah Bishop is a person of about 50 years of age. About thirty years ago [ca. 1774], she was a lady of considerable beauty, with a competent share of mental endowments and education.

She was possessed of a handsome fortune, but was of a tender and delicate constitution. She enjoyed but a low degree of health, and could be hardly comfortable without constant recourse to medicine and careful attendance, and was often heard to say that she dreaded no animal on earth but man. Disgusted with men, and consequently with the world, about twenty three years ago [ca. 1781] she withdrew herself from all human society, and in the bloom of life, resorted to the mountains which divide Salem from North Salem, near New York, where she has spent her days in a cave or rather cleft of the rock. 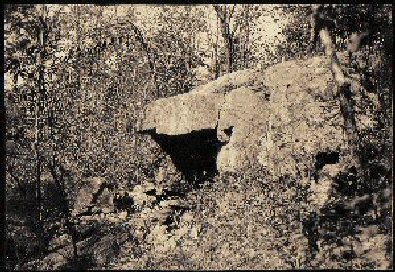 Yesterday I went in company of two Captain Smiths of this [New York] town to the mountain to visit the hermitage. As you pass the southern and elevated ridge of the mountain and begin to descend to the southern steep, you meet with a perpendicular descent of a rock, in the front of which is this cave.

At the foot of this rock is a gentle descent of rich and fertile ground, extending about ten rods [165 feet] when it instantly forms a frightful precipice, descending half a mile to the pond called Long Pond. In the front of the rock, on the north where the cave is and level with the ground there appears a large frustum [geometric configuration] of the rock, of a double fathom [12 feet] to size, thrown out by some unknown convulsion of nature, and lying in front of the cavity from which it was rent, partly inclosing the mouth and forms the roof of this humble mansion.

This cavity is the habitation of the hermitess, in which she has passed the best of her years, excluded from all society. She keeps no domestic animals, not even fowl, cat, or dog. Her little plantation, consisting of half an acre, is cleared of its wood and reduced to grass where she has raised a few peach trees, and early plants a few hills of beans, cucumbers and potatoes.

The whole is surrounded with a luxuriant grape vine, which overspreads the surrounding woods and it is very productive. On the opposite side of this little tenement, is a fine fountain of excellent water. At this mountain we found the wonderful woman whose appearance it is a little difficult to describe. Indeed like nature in its first state, she was without form. Her dress appeared little else than one confused and shapeless mass of rags, patched together without any order, which obscured all human shape excepting her head, which was clothed with a luxuriancy of lank gray hair depending on every side as time had formed it, without any covering or ornament.

When she discovered our approach, she exhibited the appearance of a wild and timid animal. She started and hastened to her cave, which she entered and barricaded the entrance with old branches pulled from the decayed trees. We approached this humble habitation, and after some conversation with its inmate, obtained liberty to remove the palisades [wooden obstacles] and look in for we were not able to enter, the room being only sufficient to accommodate one person.

We saw no utensil either for labor or cookery save an old pewter basin and a gourd shell; no bed but the solid rock, unless it were a few old rags scattered here and there. No bed clothes of any kind and not the least appearance of food or fire. She had indeed a place in one corner of the cell where a fire had at some time been kindled, but it did not appear there had been one for some months.

To confirm this, a gentleman says he passed her cell five or six days after the great fail of snow in the beginning of March, that she had no fire then, and had not been out of her cave since the snow had fallen. How she subsists during the severe seasons is a mystery; she says she eats but little flesh of any kind. In the summer she lives on berries, nuts and roots.

We conversed with her for some time, and found her to be of a sound mind, a religious turn of thought, and entirely happy in her situation. Of this she has given repeated proofs by refusing to quit this dreary abode.

She keeps a bible with her and says she takes much satisfaction and spends much time in reading it.